4th of July Brings Fireworks to Midstream.Taking the Good with the Bad


Let’s start with the good news.  On Sunday July 5th, Dominion Energy Inc. announced two key developments.  First, the company announced the cancellation of the Atlantic Coast Pipeline (“ACP”) natural gas pipeline project.  In a way, this was not surprising given the tremendous environmental/regulatory resistance leading to a multi-year delay and large cost overruns.   Interestingly, though, this decision comes right after the favorable Supreme Court ruling in mid-June that this pipeline would effectively be clear to run under the Appalachian Trail.  The read-through from this cancellation is a potential positive for Equitrans Midstream Corporation’s Mountain Valley Pipeline (“MVP”) natural gas pipeline project, which is more than 90% complete and serves similar markets.  Potentially, this project could be upsized.

More broadly speaking, this is just another sign that constructing expensive large-scale projects in our industry is extremely difficult in today’s world, regardless of who is President.  The silver lining, though, is that Midstream companies are less likely today to take on such projects because of these challenges and the simple fact that they are generally not needed in the post-Shale buildout era given already sufficient infrastructure and curtailfed production.  This, of course, benefits Free Cash Flow as growth capital expenditures continue to come down for the Midstream group.

The other arguably more impactful announcement from Dominion was that Buffett’s Berkshire Hathaway was buying Dominion’s natural gas pipeline and storage business for approximately $10 billion.  Coincidentally, we have received several investor questions in recent weeks related to M&A, basically asking why there haven’t been more transactions in this downturn.  We discussed this and other timely issues on our June 24th webinar Navigating the energy markets upturn with a focus on midstream: where are the opportunities?  As if right on cue, Buffett pulled the trigger on his first large acquisition during the Coronavirus pandemic

Despite all the environmental activism and often far-fetched idealism (eg the “Green New Deal”), it appears Buffett, a Democrat, sees the value in natural gas pipeline assets and the critical role gas plays in our day-to-day lives as a clean source of energy.  We think this is a big vote of confidence for the Midstream business, supportive of our natural gas theme and likely benefitting other names with natural gas pipelines including Williams, Kinder Morgan, Equitrans Midstream, and TC Pipelines.

We thought that was going to be the extent of our blog, but then Bloomberg reported early Monday morning that the District Court for DC ruled that the Dakota Access pipeline (“DAPL”) –yes that DAPL—must shut down by August 5th until the Army Corps of Engineers can draft a new environmental analysis. This decision to shutdown was most unexpected and is highly disruptive not just to the system’s owners, but for the region’s energy industry, specifically impacting Bakken basis differentials, certain producers, and those with gathering and processing businesses.  DAPL represents nearly half of the basin’s pipeline export capacity—ironically, this would necessitate more use of crude-by-rail, which is significantly more expensive and less environmentally friendly.  As such, we expect this decision to be imminently appealed.  Absent a successful appeal, the Army Corps estimates the time to complete a new environmental impact statement could take 13 months to mid-21, and potentially into a Biden presidency.  Stay tuned.

Obviously, DAPL owners including Energy Transfer and Phillips 66 Partners (PSXP is most exposed), along with Oneok (a key operator in the Bakken), are underperforming on the news.   Given the ownership split (ET - 36.4%, ENB - 27.6%, PSXP - 25%, MPLX - 9.2%, XOM -2%), the estimated EBITDA contribution from DAPL is as follows: 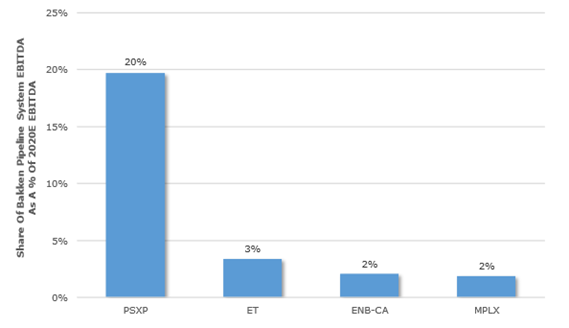 To wrap up, considering both the DAPL ruling and the ACP project cancellation, the pressure from regulatory challenges –which likely isn’t going anywhere anytime soon—underscores the value of infrastructure assets “in the ground”.  It appears that Warren Buffett agrees.